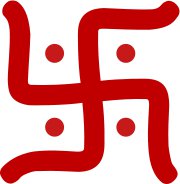 The Swastika is a holy sign and symbol from thousands of years ago. Practically, the only symbol that is more important in the Vedic tradition is the Sanskrit Om Symbol. It is an ancient symbol and has been found on sculptures from the early excavations of Mohenjo-Daro. As explained at http://en.wikipedia.org/wiki/Swastika_origin_theories#Origin_hypotheses: "Beyond its certain presence in the "proto-writing" symbol systems emerging in the Neolithic period (9500 BC), nothing certain is known about the symbol's origin." Some historians also believe that ancient forts were built in the shape that closely resembled the Swastika for reasons of defense because it would be difficult for an enemy to invade all parts of a fort in this shape.

Unfortunately, in the West, it has a negative connotation because of its use by the Nazis from 1935. At that time it was seen as a black cross on a white circle, and now, amongst some sections of society, it is viewed as a symbol that represents a radical perspective. But the real meaning of the symbol, before it was used by the Nazis in Germany, was very different.

The Swastika appears as a cross with branches bent at right angles, pointing in a clockwise direction. In essence, it represents well-being for all, and the circular nature of its points represents the repetitive nature of reincarnation, and also indicates the all-pervasiveness of the Absolute and the eternal nature of the Brahman, the spiritual dimension. If you draw a circle around it, it also symbolizes the Sun-god, Surya, as the ultimate source of light, heat and the energy of the universe that flows in all directions. The four arms of the Swastika stand for the four main directions, namely North, South, East, and West. The central point of the Swastika also represents the navel of Lord Vishnu from which Lord Brahma originated. This also indicates the expanding nature of the universe from a central point. The Swastika also represents the constantly changing world which evolves around an unchanging center, which is God.

The four branches of the Swastika represent the fourfold principles of divinity, which include: 1) Brahma, as the four-faced secondary creator of the universe who spreads the sacred knowledge in four directions; 2) the four Vedas, namely the Rig, Sama, Yajur, and Atharva; 3) the four aims of life or Purusharthas, namely, Dharma (righteousness or sacred duty), Artha (acquiring wealth), Kama (fulfilling desires), and Moksha (liberation from any further cycles of birth and death); 4) the four ashramas of life which make the latter possible, namely Brahmacharya (student life of self-control), Grihastha (house-holder life), Vanaprastha (retired), and Sannyasa (life of renunciation); and 5) the four Varnas, or Brahman, Kshatriya, Vaishya, and Shudra.

The word of Swastika in Sanskrit is composed of two words, "Su" (good) and "Asati" (to exists) which means "May good prevail." Therefore, it also represents happiness, and is often displayed at celebrations, cultural and religious ceremonies, and at weddings or festivals of the Vedic tradition. The Swastika also is a symbol of auspiciousness, peace and prosperity. Thus, making the Swastika in the rangoli style with multicolored powder at such events as births, marriages, or any joyous holiday, indicates the wish for everyone's welfare. It also represents happiness, safety, fertility, and prosperity.

Other cultures also have high regard for the Swastika. The Buddhists consider it as the symbol of the genesis of all flora. Jains also draw the Swastika in front of their deities when making offerings to them. In antiquity, the swastika was used extensively by Hittites, Celts and Greeks, among others. It occurs in other Asian, European, African and Native American cultures ­ sometimes as a geometrical motif, sometimes as a religious symbol.

From http://en.wikipedia.org/wiki/Swastika we also learn: "The swastika was a widely used Native American symbol. It was used by many southwestern tribes, most notably the Navajo. Among different tribes the swastika carried various meanings. To the Hopi it represented the wandering Hopi clans; to the Navajo it represented a whirling log ( tsil no'oli' ), a sacred image representing a legend that was used in healing rituals."

The Navajo used the symbol to represent whirling logs.  From http://nativeamericanjewelrytips.wordpress.com/2010/06/10/native-american-symbol-whirling-log-swastika/  it is explained that "Whirling Logs are used in Navajo sand paintings during a healing or other type of ceremony. A sand painting is supposed to be a temporary piece of art which is destroyed after the ceremony is over. However sand painting designs are also used in prints and framed paintings, rugs and on jewelry. The Whirling Log symbol is associated with a narrative involving a man (sometimes called the Culture Hero) who takes a journey down the San Juan River in a hollowed out log canoe. During his adventure, he encounters whirlpools and a special event where the San Juan River meets the Colorado River. There he comes upon a whirling cross with Yei figures seated on the cross. From the yeis he learns much knowledge which he takes back to his people."

For these reasons you can often find the Swastika in many places around the world, and especially across the Indian subcontinent either carved, drawn, painted, or sculpted into the architecture of homes, shops, businesses, and places of worship. Many Vedic temples in India are decorated with Swastikas, or are also configured in the shape of it. It is probably the most respected and prevalent symbol one will see in India. It is indeed the symbol of prosperity and well-being. Therefore, we should all understand the real meaning of this ancient symbol.