Sarasvati, The Goddess of Learning 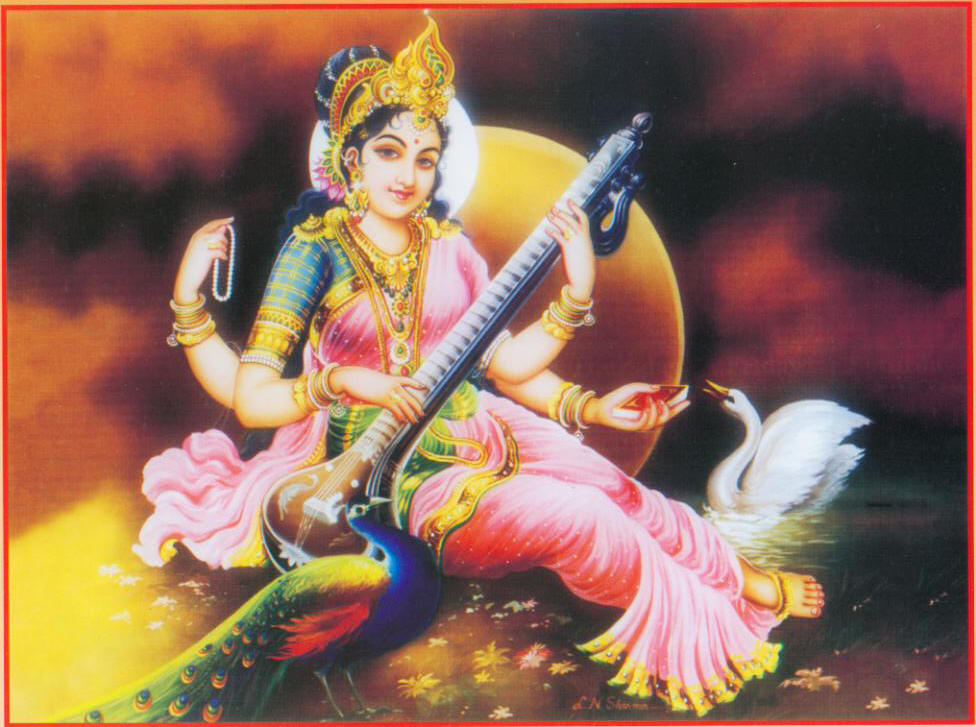 The literal meaning of the name Sarasvati is the one who gives the essential knowledge (Sara) of our own Self (Sva). The goddess Sarasvati is also considered the Goddess of Learning, or of education, intelligence, crafts, arts, and skills. As she is the consort of Brahma, who is considered the source of all knowledge, Sarasvati is knowledge itself. Thus, many students or even scholars may worship her for her blessings. She is, therefore, depicted as white in complexion, and quite beautiful and graceful.

She is often depicted sitting on a lotus, which symbolizes that she is founded in the experience of the Absolute Truth. Thus, she not only has the knowledge but also the experience of the Highest Reality. She holds in her four hands a vina instrument, an akshamala (prayer beads) in the right hand, and a pustaka (book) in the left, which represents the knowledge of all sciences. Holding the book or scriptures in one hand also indicates that this knowledge alone can bring us to the Truth. The vina shows the beauty of learning the fine arts. Playing her vina, she tunes the mind and intellect with her knowledge, and thus the seeker can be in harmony with the universe. The prayer beads represent all spiritual sciences, like meditation and japa (chanting the holy names of God), and, being held in the right hand, that it is more important than the secular knowledge contained in the book in her left hand. Her four arms represent her unrestricted power in the four directions. She also represents creativity, or the combination of power and intelligence, the basis of creativity.

Her name literally means the one who flows, which can be applied to thoughts, words, or the flow of a river. She is the deity of a river in the Rig-veda. Her other names include Sarada (giver of essence), Brahmi (wife of Brahma), Mahavidya (holder of supreme knowledge), Bharati (eloquence), Maha-vidya (transcendent knowledge), Arya (noble one), Maha-vani (the transcendent word), Kamadhenu (like the wish-fulfilling cow), Dhaneshvari (the divinity of wealth), and Vagishvari (mistress of speech). It is through speech that knowledge manifests in action. It is through her that language and writing is revealed.

She is also occasionally shown with five faces and eight hands, representing her additional powers. Other objects that she may hold include the pasha (noose), ankusha (goad), chakra (disc), padma (lotus), trishula (trident), and shankha (conch). Sometimes she is also seen riding on a swan, the carrier of her spouse, Brahma. At other times she is seen riding on a peacock or sitting with one nearby. The peacock represents the worldly beauty, which can distract the spiritual aspirant. The swan signifies the acquisition of wisdom and knowledge because of its ability to separate milk from water when eating, and thus acquire only the milk.

[Back to the Articles page]