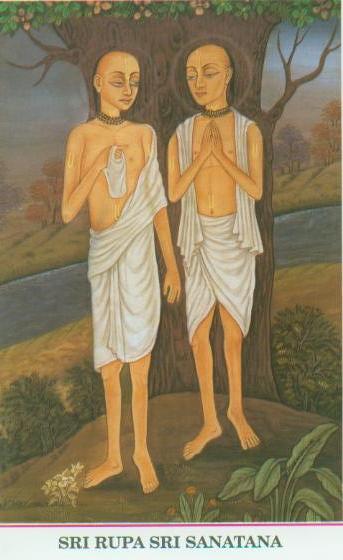 Sri Caitanya Mahaprabhu commissioned Sri Rupa Gosvami to write on the science of rasa-tattva. In Caitanya-candrodaya, Sri Kavi Karnapura says that Sri Rupa Gosvami is the form of true love and devotion. Sri Caitanya empowered him to explain His own love and devotion, and to propagate it to the world. Lord Caitanya manifested His own pastimes through Sri Rupa Gosvami. He received the title bhakti-rasacarya (guru of devotional mellows) for his devotional classics, Bhakti-rasamrta sindhu, Ujjvala Nilamani, Lalita Madhava and others. Bhakti-rasamrta sindhu gives the es­sence of all Vedic scriptures regarding the kingdom of bhakti. In great detail it explains how to advance in Krishna consciousness and attain prema-bhakti, pure unalloyed love for Radha-Govinda in Sri Vrndavana.

"When Sri Rupa Gosvami would sit in his bhajana kutir at Ter Kadamba (Nandagram, Vrndavana), and write about the pangs of separation that Sri Radha and Sri Krishna felt for one another the leaves of the Kadamba tree would fall off just like tears running down the face of someone in pain. And when Sri Rupa wrote about Radha and Krishna's ecstatic loving reunion, that overjoyed Kadamba tree immediately sprouted new leaves and blossoming flowers. By the mercy of a pure Vaisnava like Srila Rupa Gosvami this Kadamba tree could understand and appreciate the intimate and confidential subject matters which remain beyond our com­prehension." (Sripad B.V. Narayana Maharaja)

Sri Rupa Gosvami established the Deities of Radha-Govinda in Vrndavana. Bhakti-ratnakar quotes one song from Srinivasa Acarya to describe the beauty of Rupa Gosvami's beloved Govindaji Deity: "Having seen the incomparable beauty of Sri Govinda, Sri Radhika begins describing it to Her sakhis: 'Who has sculp­tured that moon-like face and who has sculptured those two lotus eyes? Only My heart knows how I feel when I see Him. Who has shaped His earrings, cut carefully in gems? My mind is fixed on them. His nose pearl surrounded by a golden ring looks like a moon-like white flower surrounded by lightning, smiling from behind some blue clouds.

'His forehead is decorated with sandal tilaka and beautiful mind-enchanting designs. He shines within My heart. Yet My heart aches being incapable of beholding His beautiful face to My full satisfaction. If God had given Me the power I could continual­ly enjoy His sweet voice. His arms are stronger than the trunks of elephants. My youthful body longs for the touch of His fingers. His graceful movements rival the gait of a maddened elephant. He is an ocean of beauty.'"

Today in Jaipur, Rajasthan Sri Rupa Gosvami's original Deities of Radha-Govindaji are forever expanding their un­limited beauty. Everyday ten-thousand devotees run to attend Their mangala arotika. A prati-bhu Deity of Govindaji resides in the "new" Govindaji temple behind the historic masterpiece of ar­chitecture that once served Radha-Govinda in Vrndavana.

Sri Krishna Dasa Kaviraja says the Deity of Radha-Govindaji shows us how to worship Radha and Krishna. Radha-Govindaji accepts our service and give inspiration to increase our surrender on the path of bhakti. Acting exactly like the siksa-guru, Govindaji directs us and gives us opportunities to serve Him.

[Home page] [Back to Biographies of Saints and Sages list]