Once everything is ready for the Ratha-Yatra parade, the ropes of the carts are unrolled through the crowds and hundreds of people take hold to prepare for pulling the carts down the street. Once the crowd moves forward, many people run to the side to get out of the way and simply watch as the huge carts go by. Others, as you can see in the photo, would rather stay out of the way and remain up on a rooftop and watch the happenings. Others make a point to try and pull on the ropes from each of the carts, at least for a while. Pulling on the ropes for the pleasure of the Deities, or simply singing in the kirtana groups, or even just watching and seeing the Deities, is said to be enough to give you liberation from any further material existence, as long as your heart is filled with devotion.

Here we see the cart of Lord Balarama as it begins to move away from the two other carts. 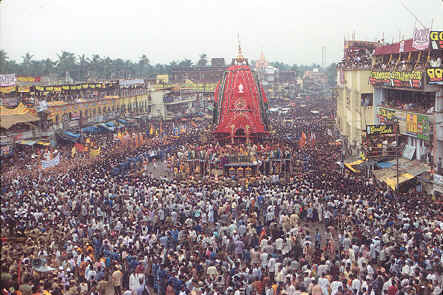 The next cart to go is Lady Subadhra's, as we see it from amongst the crowds. 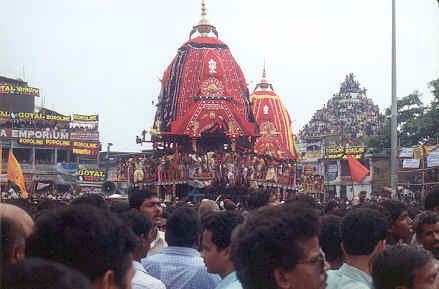 Finally, Lord Jagannatha's cart begins to move and makes its way through the crowds and down the street. 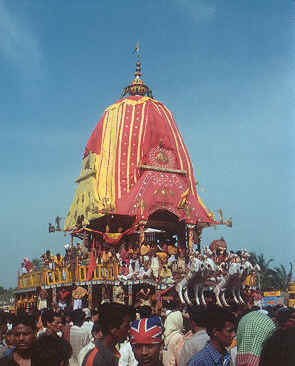 Looking closer at the cart, we can see the numerous Deity assistants, priests, and people that pack the top platform and ride along with Lord Jagannatha, who is situated in the center. 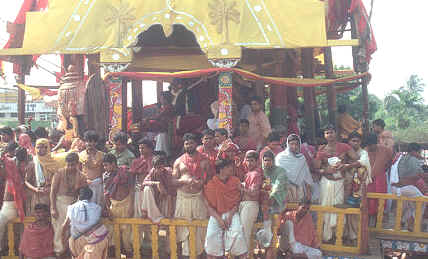 In a historic moment, the Iskcon kirtana group, led by Radhanatha Maharaja, is out in front of Lord Jagannatha's cart, chanting and singing the names of the Lord. This is a pastime right out of the descriptions of this festival as it took place 500 years ago when Lord Caitanya was present. Radhanatha Maharaja had previously received an honor from the Jagannatha temple with a gift of a red shawl and the privilege of receiving the Deities from a close position near the door as They came out of the temple. This is a rare event for a non-Indian foreigner to be respected in this way. 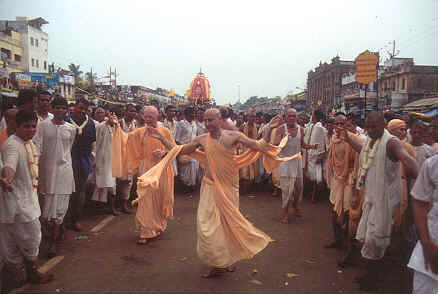 A closer view of Radhanatha Maharaja blissfully enjoying the kirtana in the Ratha-Yatra parade in front of Lord Jagannatha's cart. 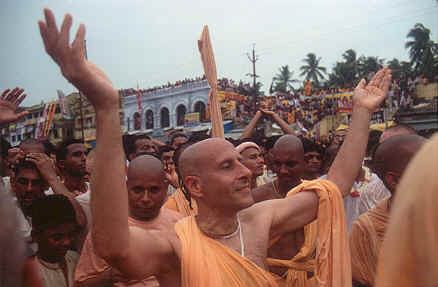 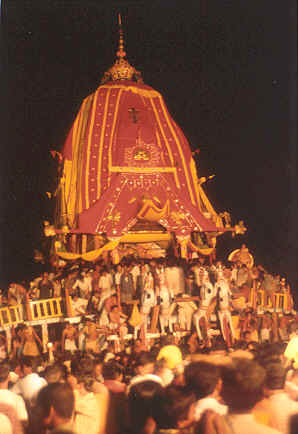 The next morning, with only the Deity's assistants on the cart again, the devotees take up the ropes, and when all is ready they again pull to bring the cart of Lord Jagannatha to the Gundicha temple. Here we can see that it has been raining, but it does not dampen the spirits and enthusiasm of the devoted. 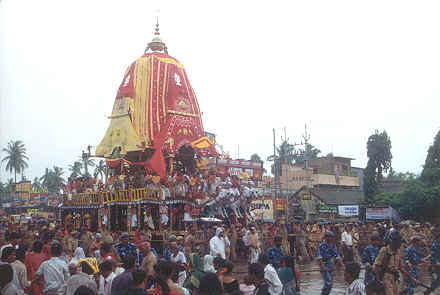 Once all of the carts reach the Gundicha temple, the Deities remain on them for another few days and nights. This provides time to allow many hundreds of pilgrims to climb on the carts and get closer views or even touch the Deities. So you will see people constantly climbing up and down the carts, even into the night as seen below. This adds to the festive atmosphere of the event. 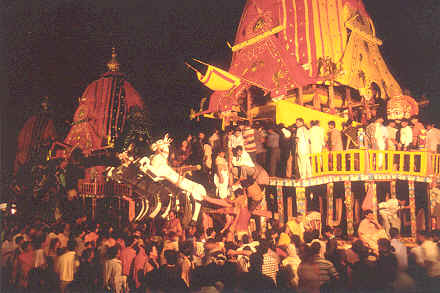 Here is another view of how many people climb up onto the carts. Still it can be difficult to get close to the Deity. Many people make a point to go up onto all three carts. For those who do not venture up on the carts and deal with the crowds of people who do, you can still sometimes get a good view of the Deities even from the ground. 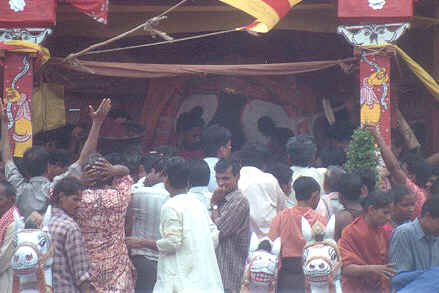 Only on the third evening are the Deities taken into the Gundicha temple where They stay for a week. Then, after Their stay, They are brought out of the Gundicha temple, taken back onto the carts, and pulled back to the main temple in a similar parade. Again the Deities will stay outside of the main temple and on the carts for a few nights. On the third night, They are dressed in gold crowns and ornaments, in a festival called Suna (gold) Vesa. Again, many thousands of people attend in a continuous stream around the carts to get a glimpse of the Deities dressed in this way.  So you only get a few minutes to view the Deities, but They look especially powerful when you see Them on the carts, dressed in the gold paraphernalia. It is definitely a special event. I went around a few times. After this, on the next evening, the Deities are brought back into the main temple where They will stay until next year. Then They will come out again for another Ratha-Yatra festival and to see all the devotees outside the confines of the temple environment. Lord Jagannatha, Lord Balarama, and Lady Subhadra ki jaya!!!

Below we see the way Lord Jagannatha looked in His gold outfit, gold Chakra in His right hand and silver conch shell in His left. 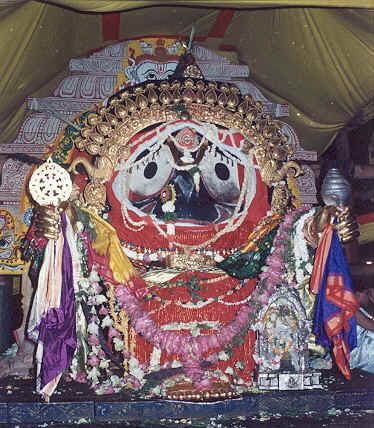 Below is Lord Balarama. 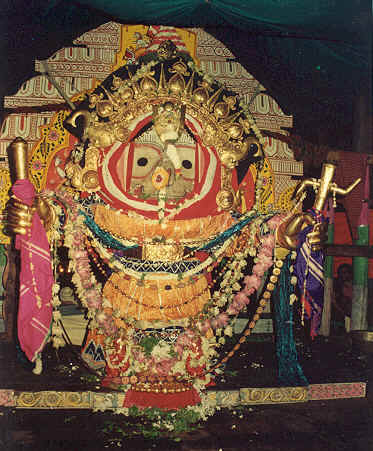 Below is Lady Subhadra who rides with the Sudarshana Chakra Deity, which is there for Her protection. 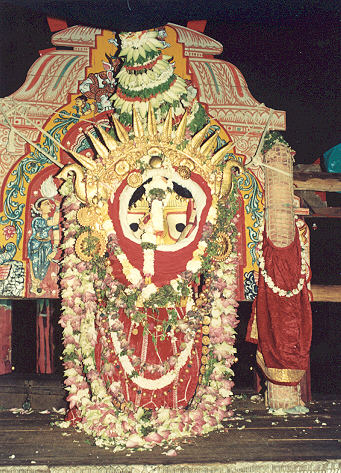 (All Ratha-Yatra photos were taken by Stephen Knapp, except for these of the gold outfits, which were taken by Sudarshana Das Mahapatra, a descendant of Vishvavasu and one of the pandas of the Puri temple. He operates the Goldie Photo Studio in Puri.)