Once again, out of the thousands of slides I have of India, it is difficult for me to pick out only a few to show. Nonetheless, I wanted to provide some just to take another look at South India, which is known for its many exquisitely ornate temples, with their tall gopurams (tower gates).  The following photographs will give just a hint of the awesome architecture that one will find there.

Below is a view of the main entrance tower for the temple of Venkatesvara, Vishnu, at Tirupati. Normally, it takes a few hours of waiting in line, as you can see, for the privilege of entering the main temple and having darshan to view the Deity. This is one of the most prominent temples in South India. 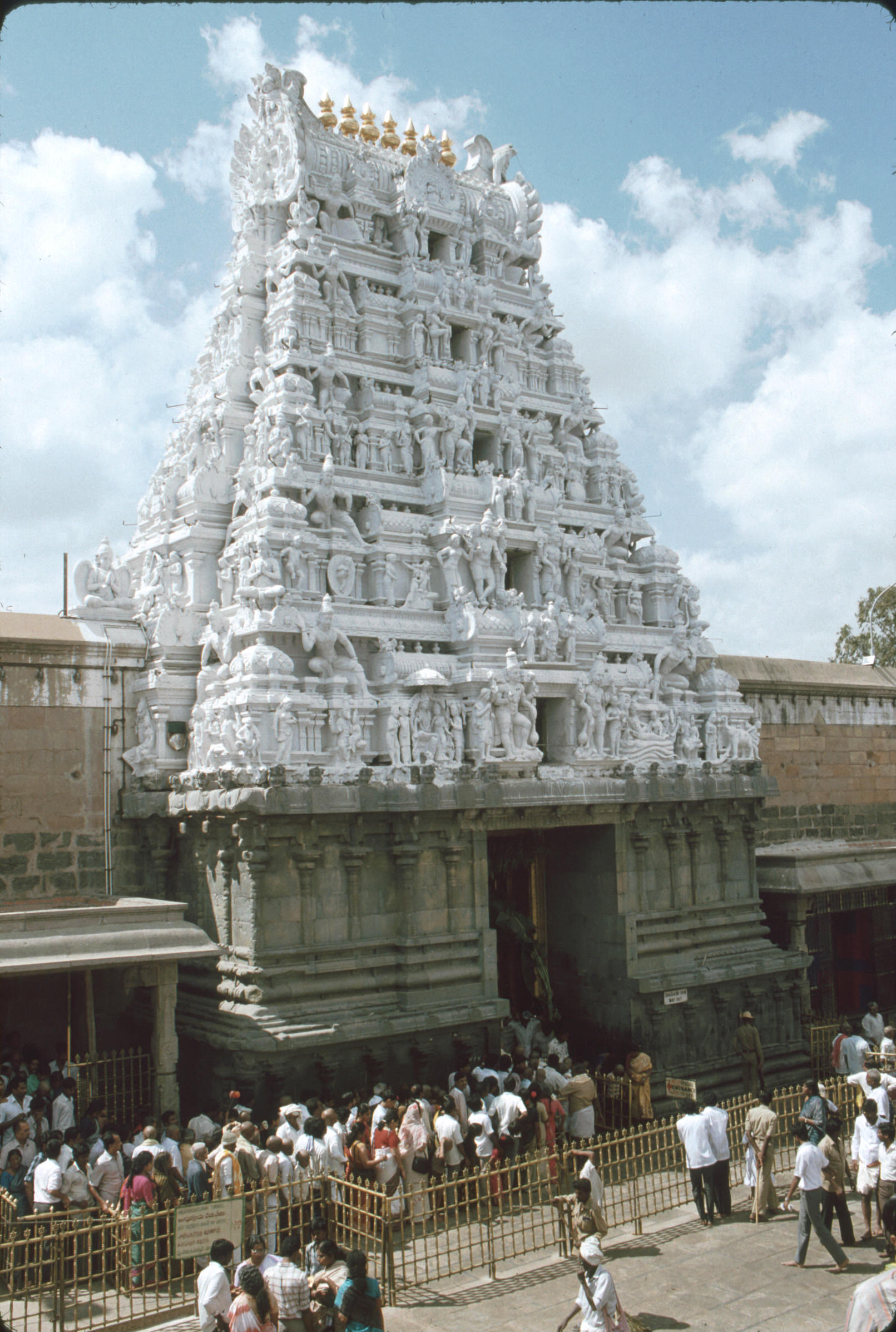 Below is one of the sadhus that wander through South India while he is visiting the temple at Chidambaram. The Chidambaram temple is a grand complex and has both Shiva and Vishnu sanctums near each other. This sadhu is unique in that he has both the markings of a Vaishnava (worshiper of Vishnu) and a Shaivite (worshiper of Shiva) on his arms. 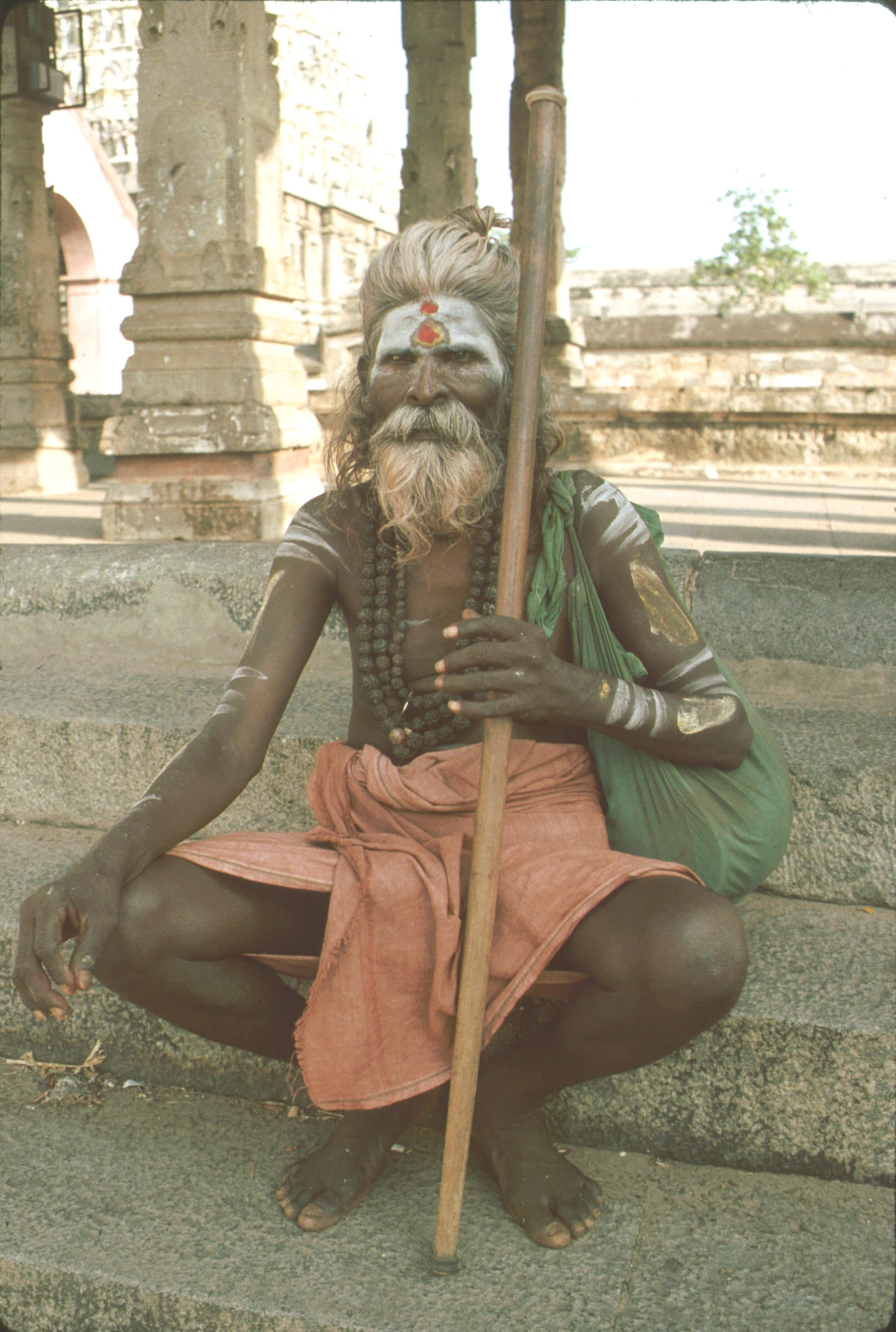 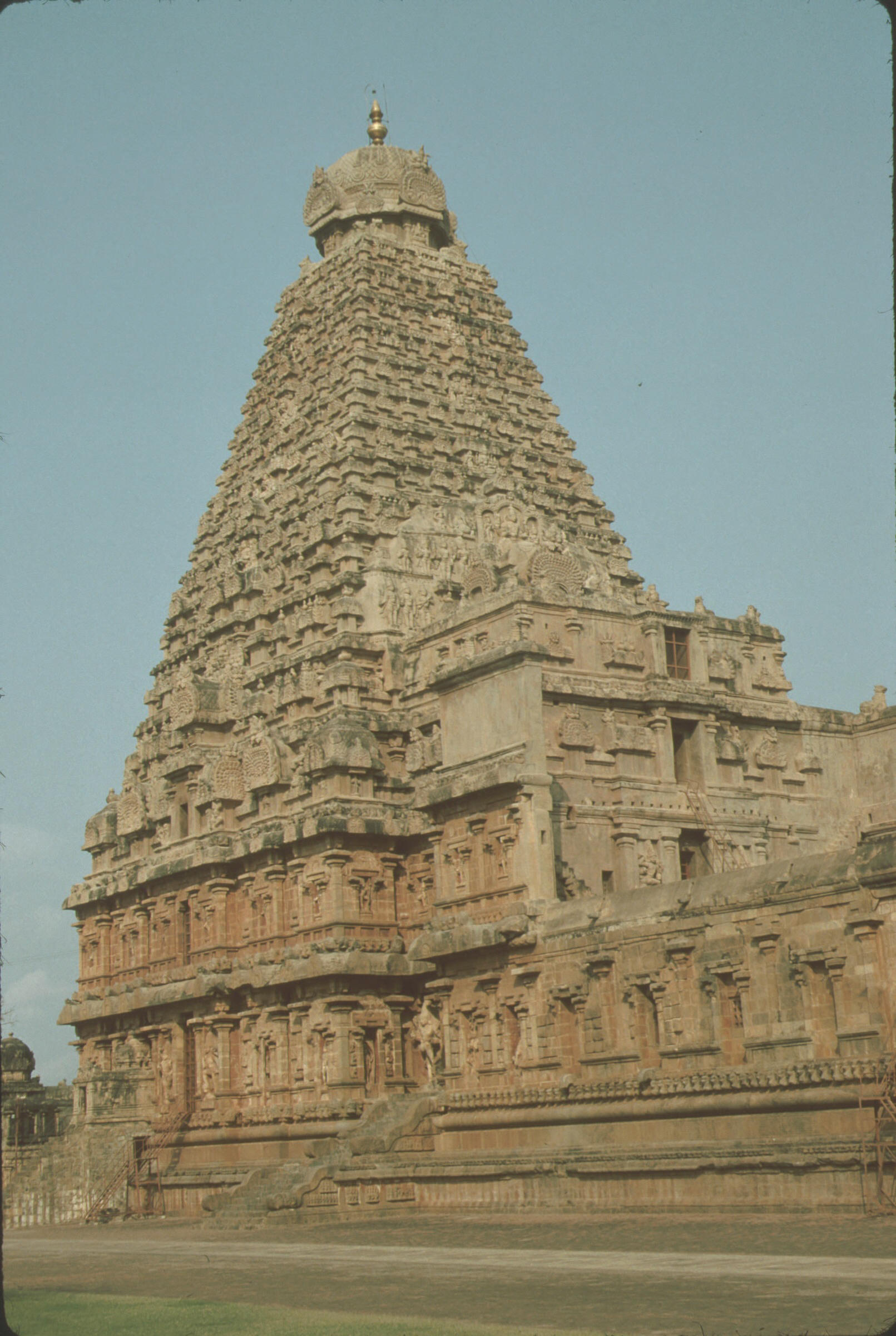 Here is the Brihadesvara (Shiva) temple at Tanjore. Built in 1003 by King Rajaraja I, it is most known for its tower that soars 216 feet up, which is capped by a finely shaped stone carved from a single piece of granite. Inside there is the largest Shiva-lingam I ever saw, ten-and-one-half fee tall by 23 feet in circumference. 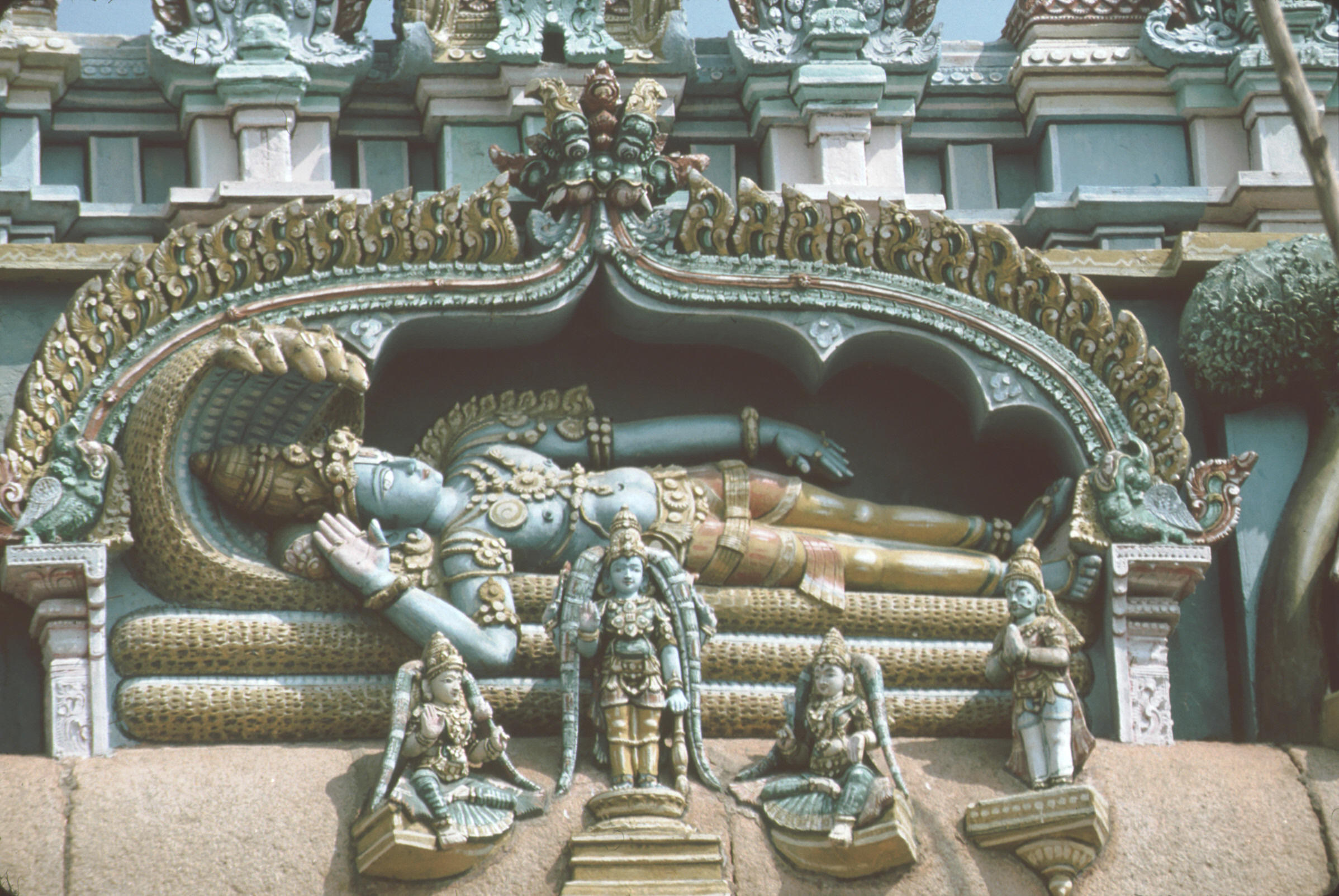 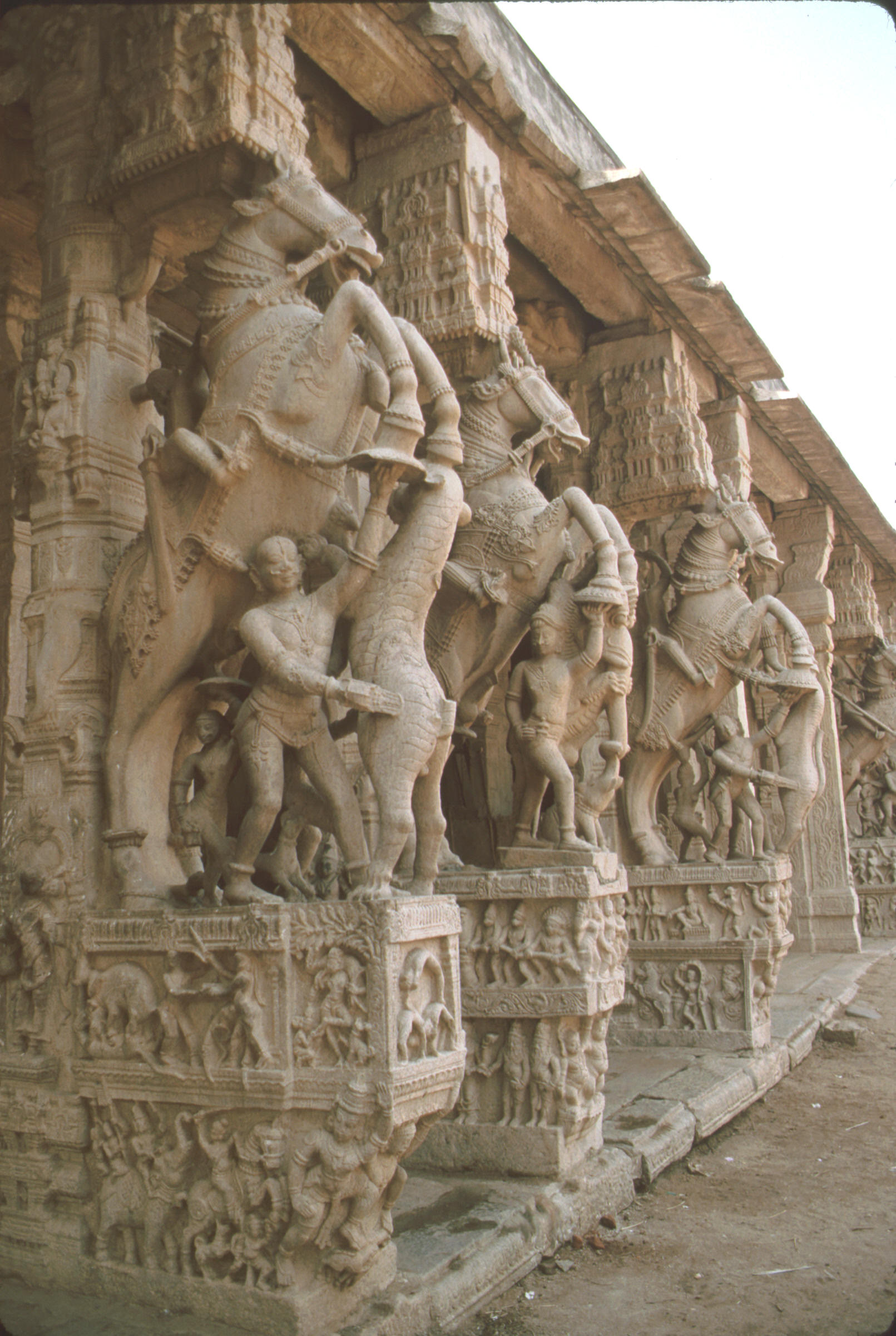 Here is an example of some of the fine stone figures that you can see at the large temple complex at Sri Rangam. 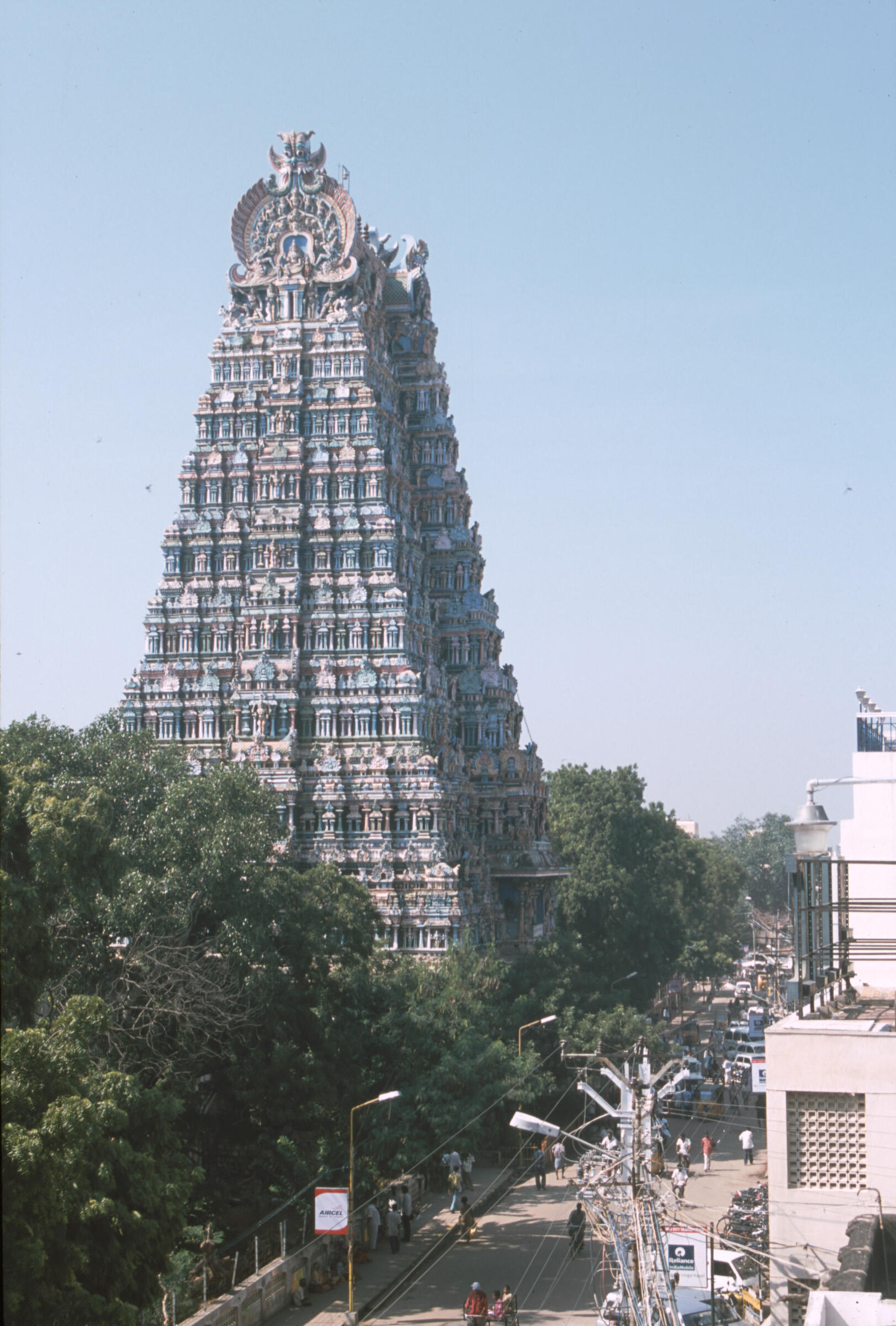 Here we see one of the huge gopurams (tower gates) at the Meenakshi temple in Madurai. This is a large and elaborate temple complex, and pilgrims visit from all over India. Notice the many tour buses parked on the street in front of the gate.

Below is the hall of 1000 pillars at the Meenakshi temple. They are finely carved, like much of the other stonework  found at this temple. At the end of the hall is a large form of dancing Shiva. 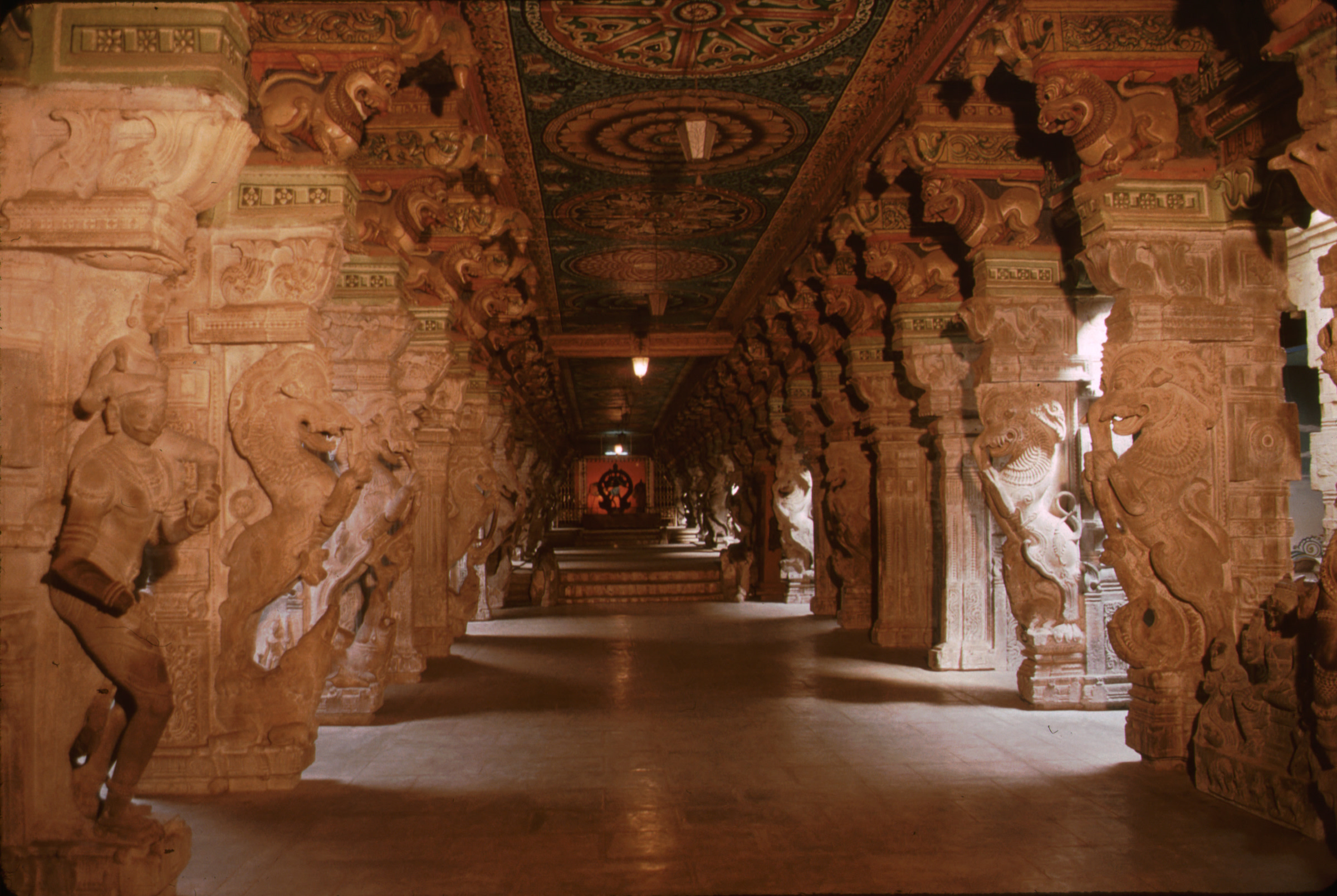 Here is an example of the ornate stone carvings that cover the huge gopurams at the Meenakshi temple. These towers are so decorated with such ornate stonework that there is hardly anything that you can find like it in the world. 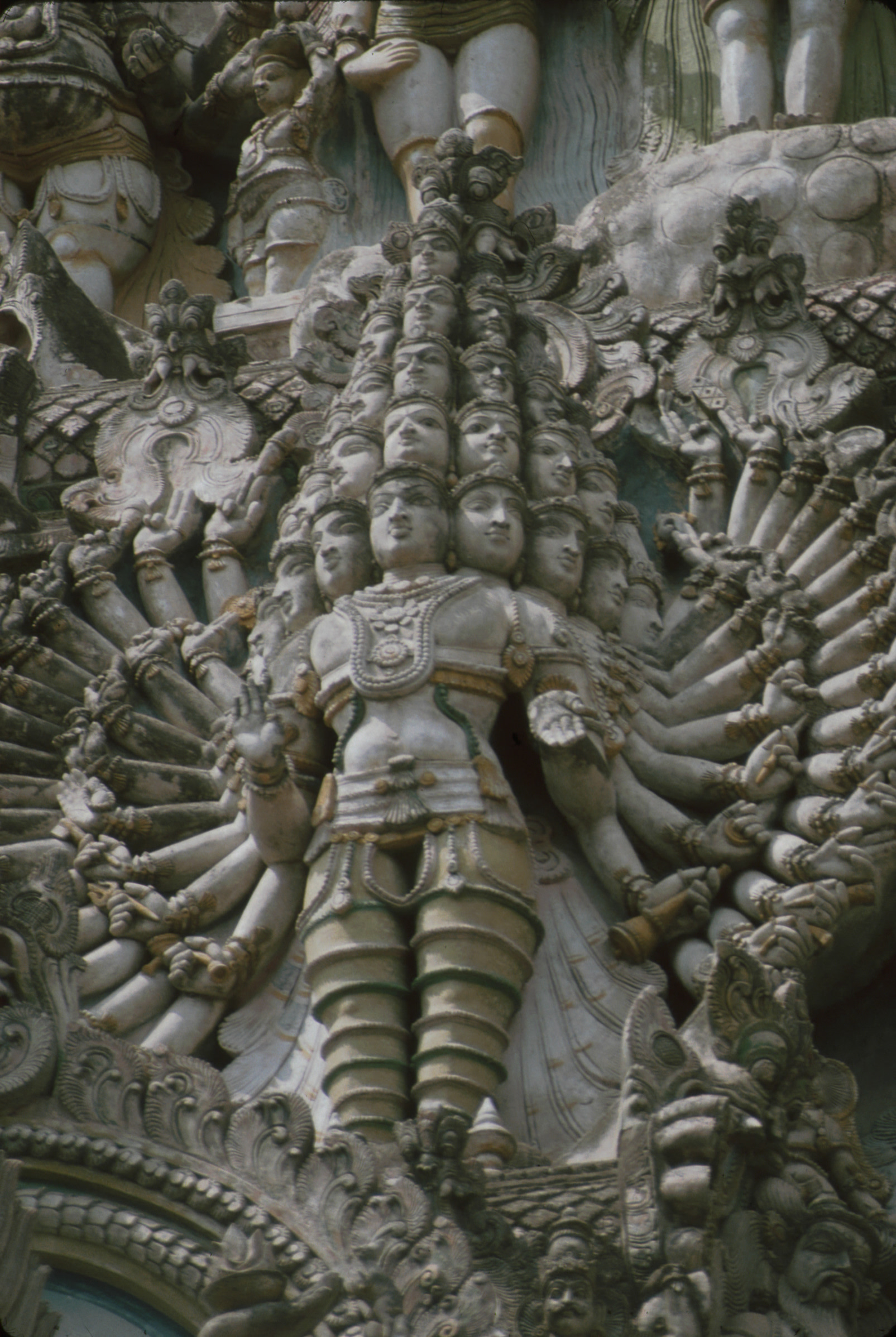 At some temples they will bring the deities out of the temple for a parade in Their honor. This is often only for certain weeks during the year. The temple at Ramesvaram, where this photo was taken, has many deities that pilgrims can view. To the right we see the deities of Shiva and Parvati depicted as being on their mountain in the Himalayas while the ten-headed demon Ravana tries, unsuccessfully, to lift the mountain, as described in the Ramayana. 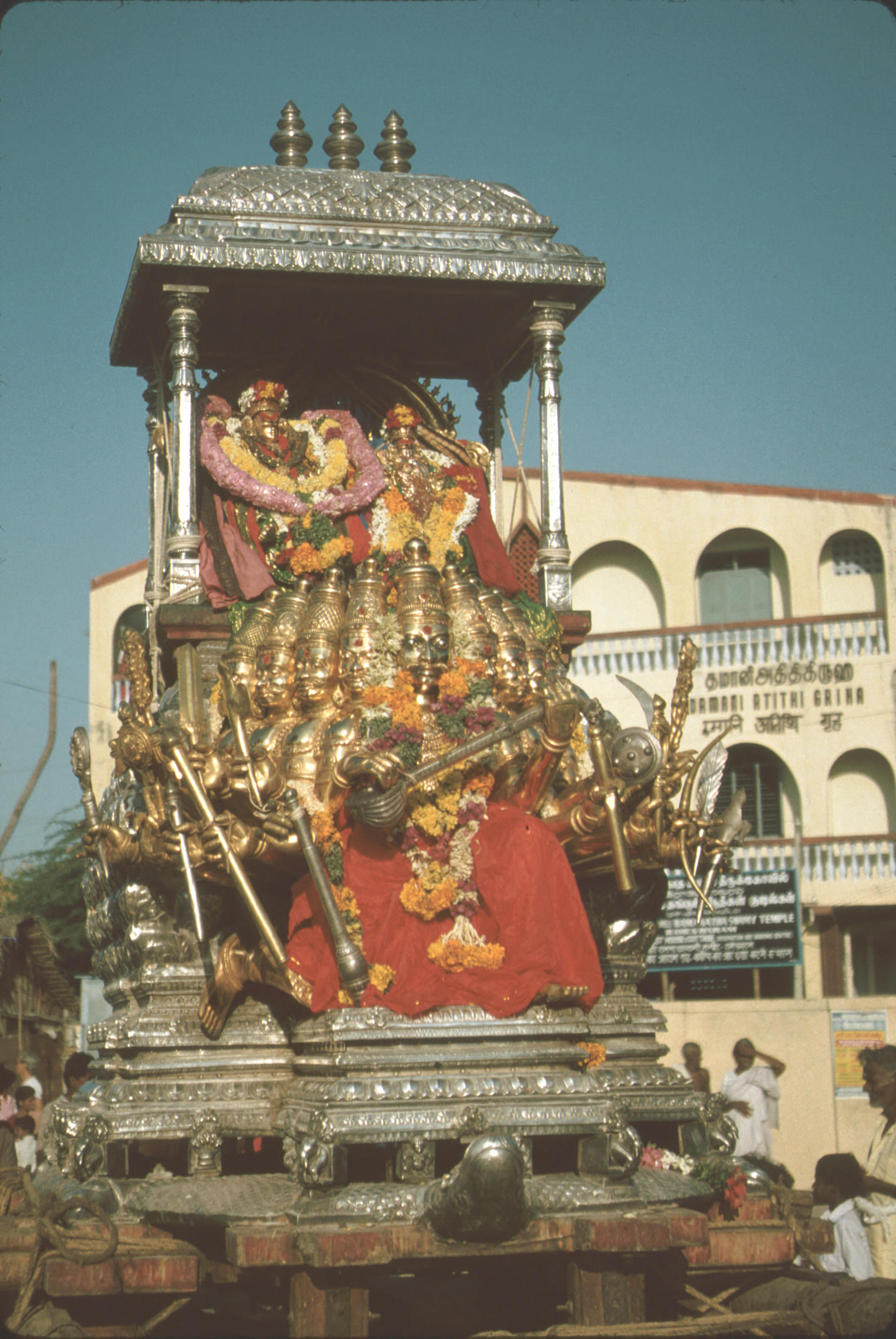 Below is an extremely elegant carving of Lord Vishnu and Lakshmi, found on the outside of the temple at Halebid. 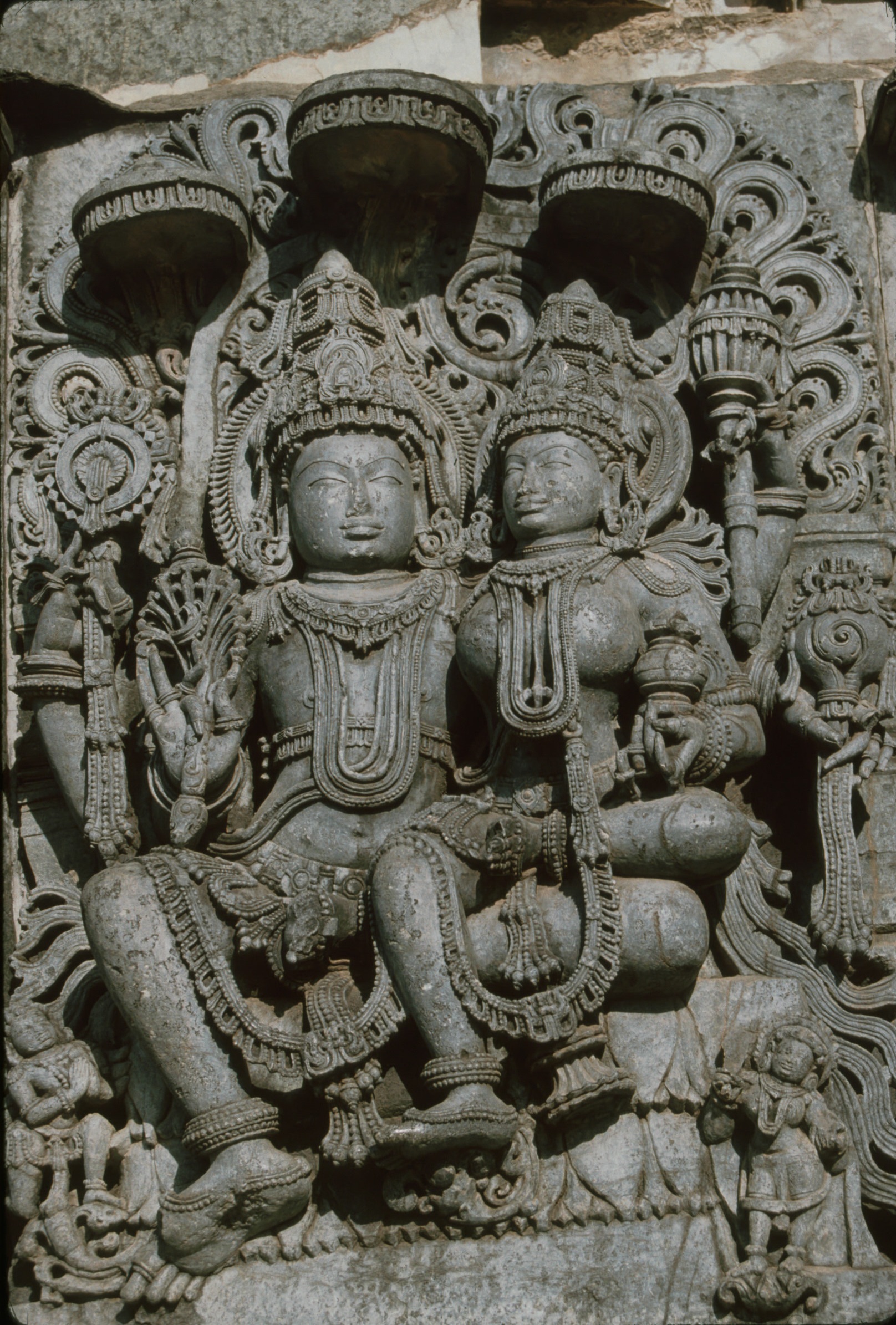 A view of one of the gopurams that mark the gateways toward the inner sanctum of the Shiva temple at Tiruvannamalai. 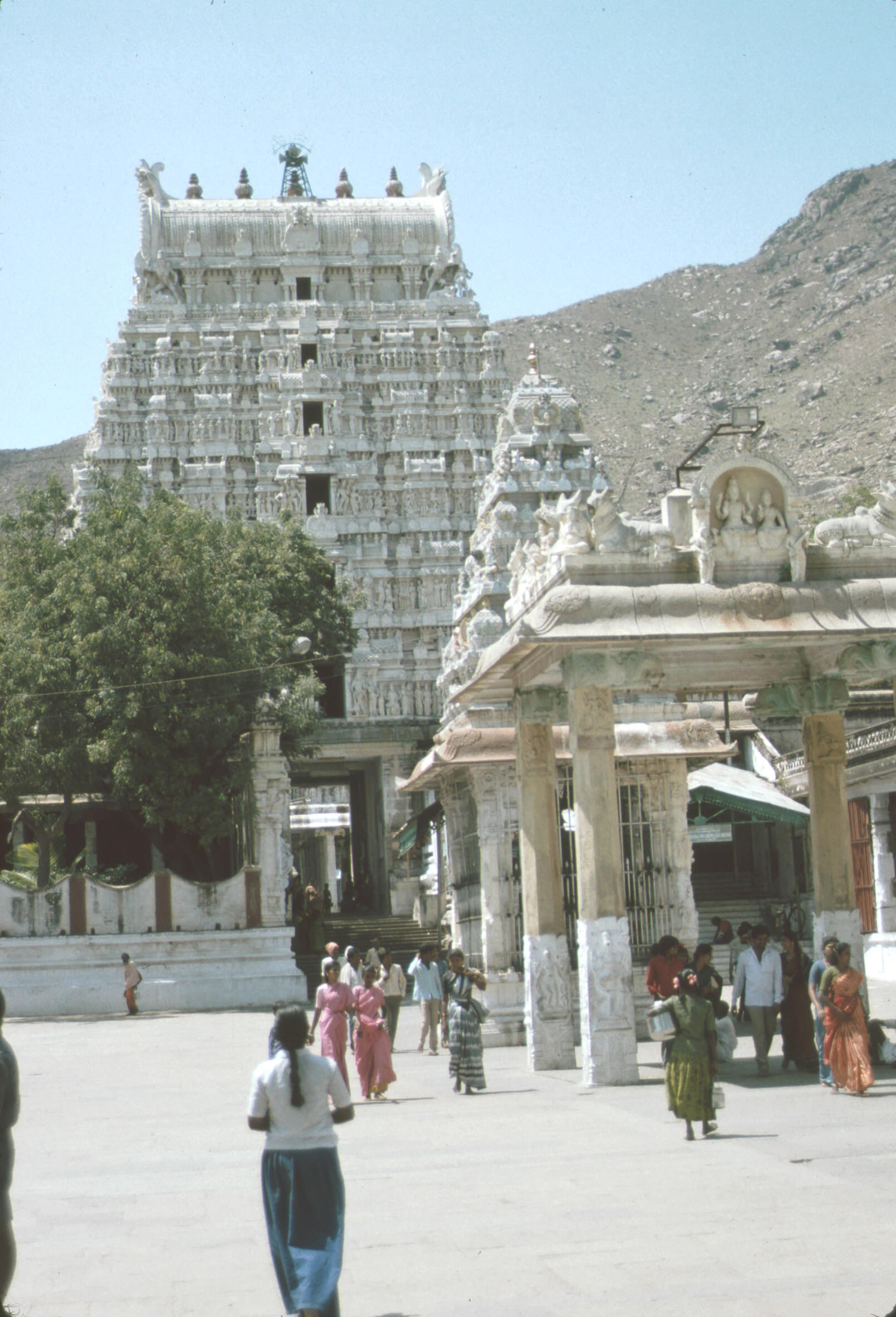 Our last photograph on this little tour is of the huge Shiva temple complex at Tiruvannamalai, a six hour bus ride south of Madras. This photo was taken on Arunachala Hill, near the ashrama of the great saint Ramana Maharshi. 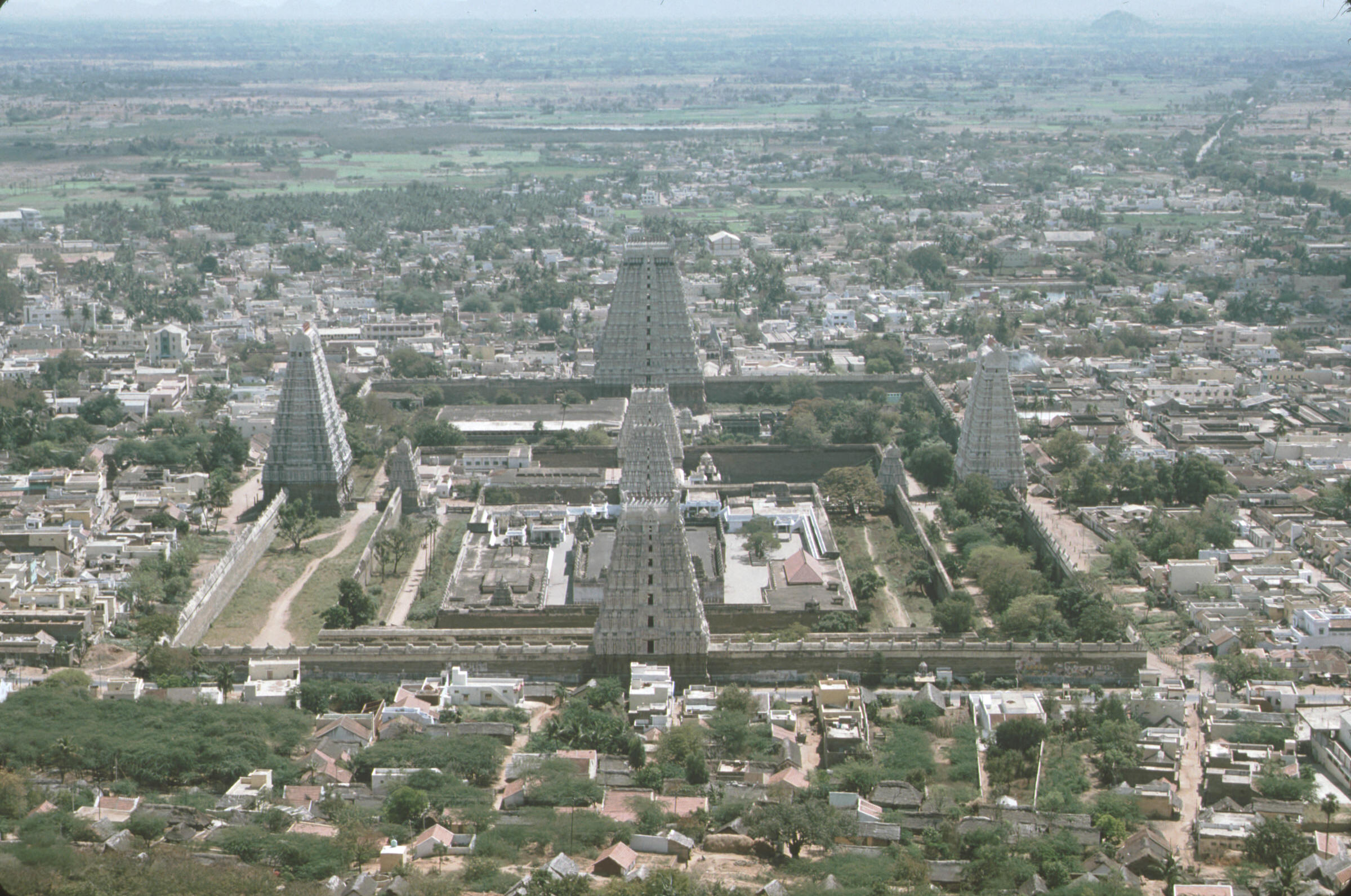