All night long on the morning of Amavasya, the new moon day, thousands of pilgrims were taking their holy dip in the sangam area, where the sacred rivers of the Ganges, Yamuna and Sarasvati meet. Astrologically, as I've explained in the descriptions of the Mela, this is considered the best time for bathing in the rivers, when the nectar of immortality manifests. It had been a cold and windy night. The rising sun gave some relief from the cold when it came up, and the light gave us the means to better see and photograph the numbers of people that were there. Now that the sun was up, many more thousands of people came from the camps, crossing the pontoon bridges, to join the millions of others at the rivers to bathe. 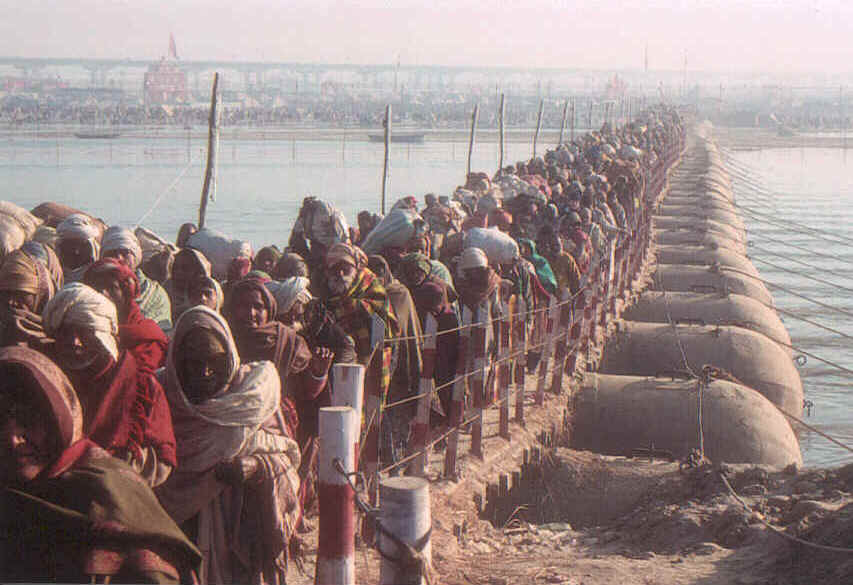 Going close to the sangam area and looking down from the beach, we can clearly see the crowds of thousands of people that go all the way to the other side. In the center area, the water is waist deep at its deepest, with a few islands along the way. So you can practically walk across the river. Outside the fences, however, the water gets deeper and you have to really swim to keep your head above the surface. 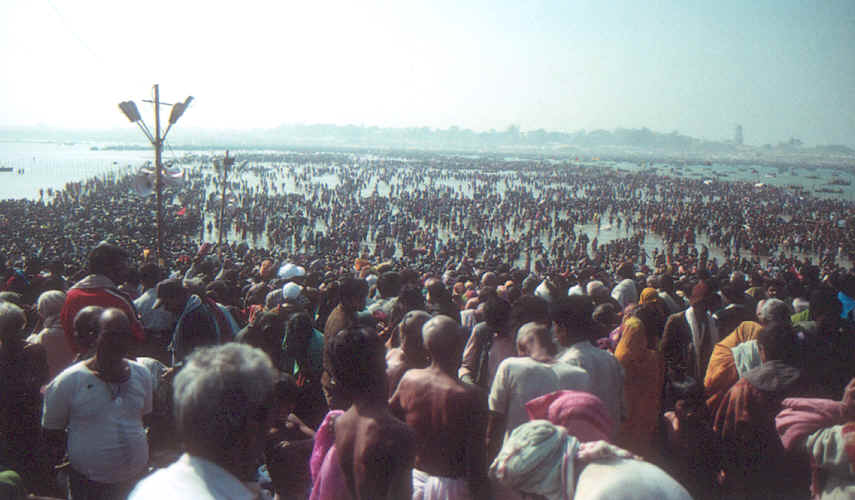 In the midst of the bathers and looking back toward the beach, we can again see how many countless people are there. And this is only what we can see. Beyond the hilltop are millions more who are also making their way toward the rivers, or going back to the camps having accomplished their mission, at least for now. For most, this is one of the high points of coming to the Kumbha Mela. 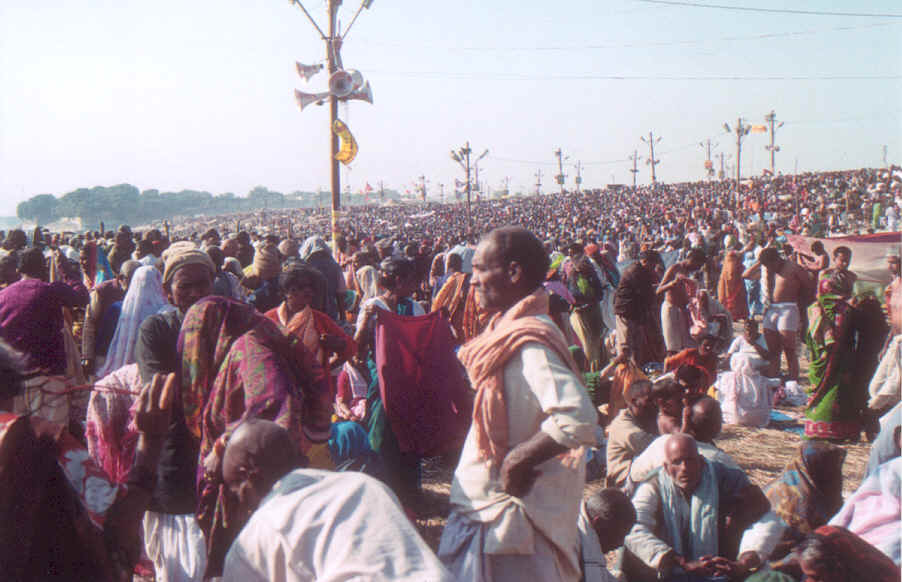 Even amongst all the noise and clatter of the millions of people, we can see this sadhu doing his morning devotions. For him, to do his early meditations and readings here at the Triveni on Amavasya day is no doubt of great significance. This happens only once every twelve years, and this Kumbha Mela festival was considered the Maha Kumbha Mela, which happens only once in every 144 years. Plus, this was the first festival of the millennium making this a truly rare event. 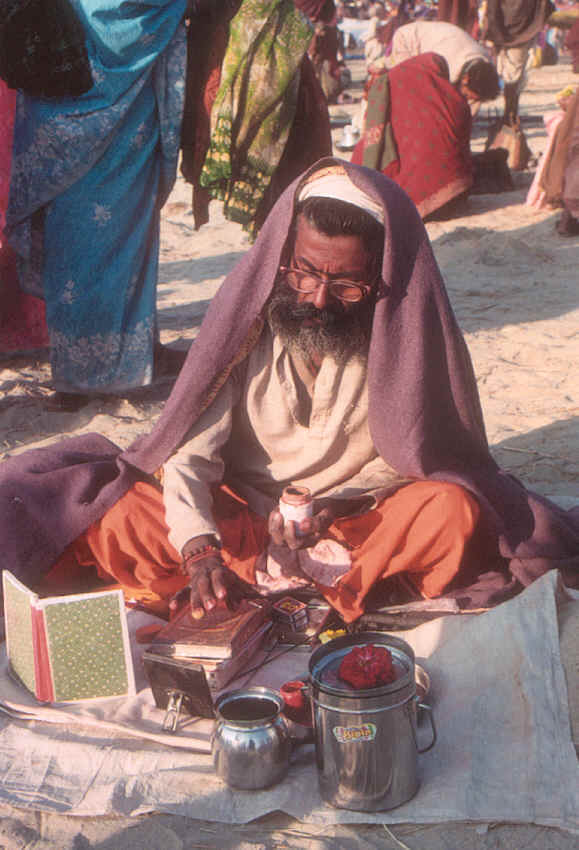 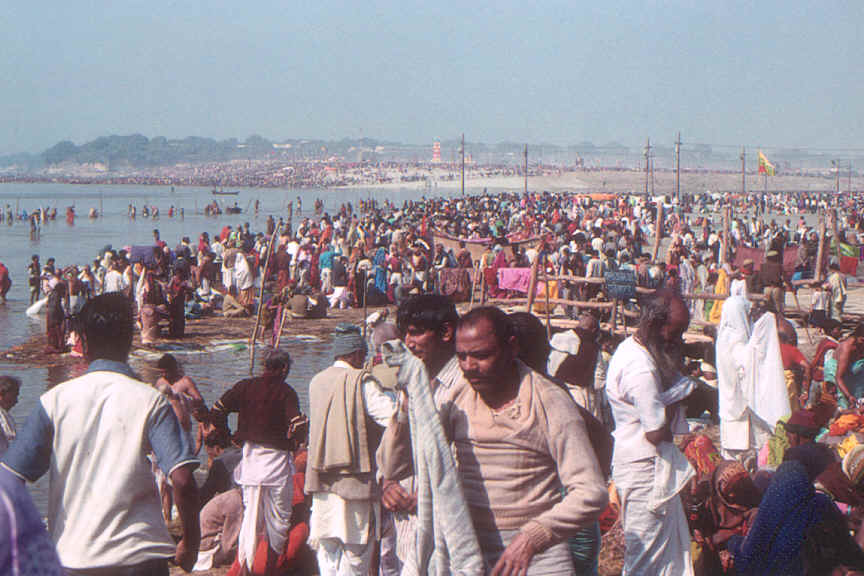 When you can get a proper space, the appropriate thing to do is to first pay respects to the Ganga. Many people offer flowers, along with a ghee lamp in a banana leaf bowl, which after placing it in the water then floats down the river. They do this because the Ganges is not merely a river, but represents and is an expansion of Ganga Devi, the mother Goddess. The river is said to also descend from heaven at Gangotri, before freezing into the glacier from where it begins. 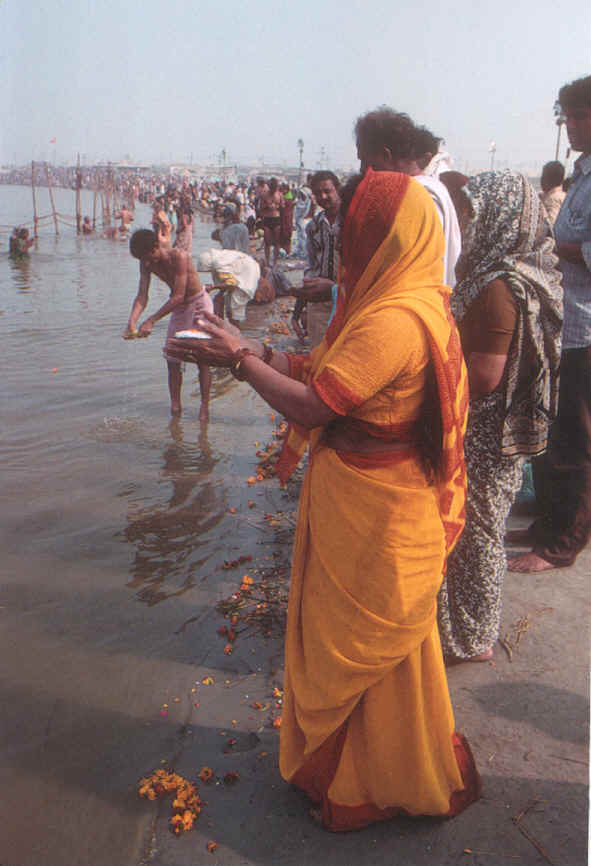 After paying the proper respects, then it is time to wade into the river, splash a little water on yourself, and when you are ready take at least three dunks into the river. Here, this man is also holding his ears to keep water out as he rises from the water. His tilok on his forehead indicates he is a Vaishnava devotee of Lord Rama, and his sacred thread hanging over his left shoulder shows that he is also a Brahmin. 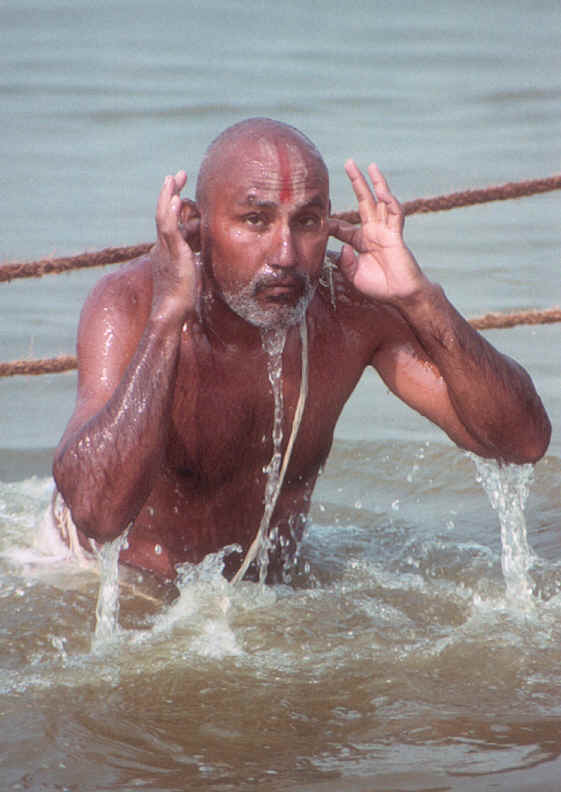 Once we have done everything we have set out to do, visited some of the numerous camps, listened to the lectures and devotional songs, seen some of the holy men, gurus, babas, and sadhus, and taken our dips in the holy rivers, it is time to start getting ready to leave and say goodbye to our many new friends. It is easy to make friends here. Everyone is here for the same purpose, to make spiritual progress toward God and rekindle our feeling of unity with humanity and the universe. In spiritual consciousness, we are all family. So it is a sweet sorrow to give our regards to the people we've met as we all prepare to go on our way. Here the children of a family who attended the Mela wave goodbye. 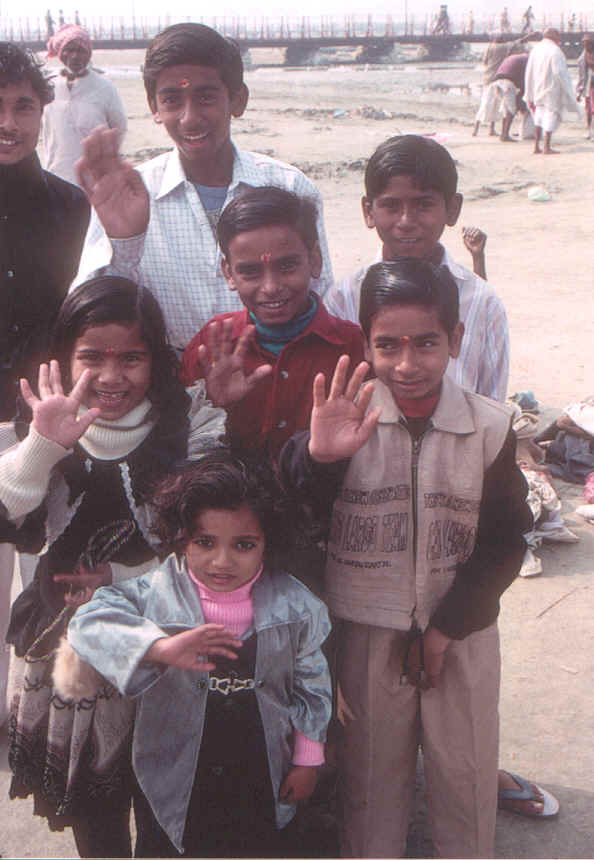 As the sun sets and the lights come on throughout the Kumbha Mela, we see the lighted pontoon bridges in the distance leading toward the sangam area, and we can contemplate a little of our position in the universe. This festival has gone on for thousands of years before us, and it will no doubt continue for thousands of years into the future. It is ageless. And we can only thank providence that we have been able to attend at least one Kumbha Mela. It leaves an impression in you that you will never forget. In something so huge, that draws so many people, that has come down from time immemorial, you begin to feel that so many things that you've taken so seriously before aren't all that important. So many little things simply do not matter, and so many are little things. And that which you have neglected, your true spiritual position in life, needs to be reassessed. This festival, and India in general, can force that on you. It makes you reexamine who you think you are. And once you do that, you are so much the better. You leave this festival with something you hadn't had before: a better understanding of yourself, the world and where you fit in. 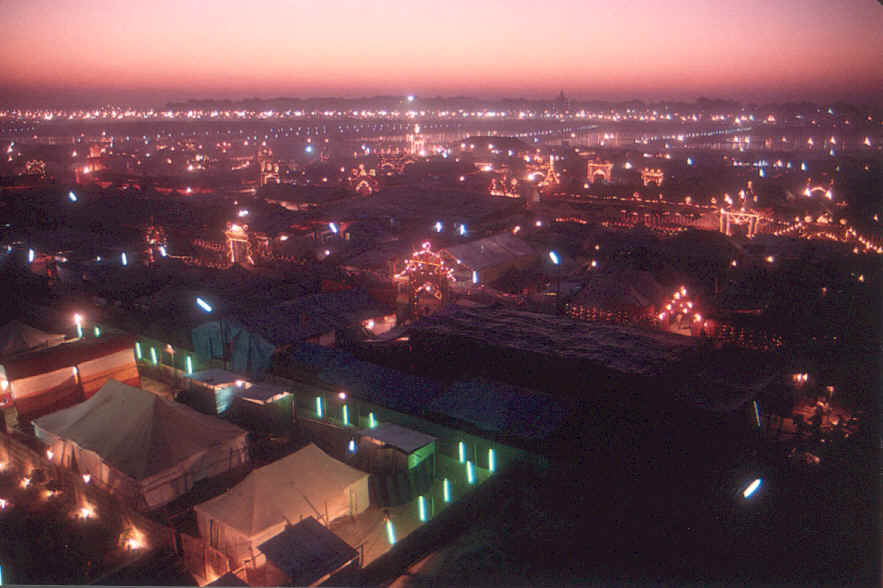 It is said that by attending a Kumbha Mela and bathing in the rivers one achieves liberation from the cycle of repeated birth and death. That is one of the main reasons why so many have come. The whole world is a temporary place. That is a lesson that the Kumbha Mela teaches in more ways than one. Sure, it's a lesson that all gurus, sadhus and ascetics teach, but as the night descends, you realize it again when, looking out over the Kumbha Mela area, you know that in another month all that you see will be gone. Everything will be disassembled and taken down, and all that will remain is nothing but the sand and wind. Our experience and what we have learned is all that remains. It is all that we take with us. 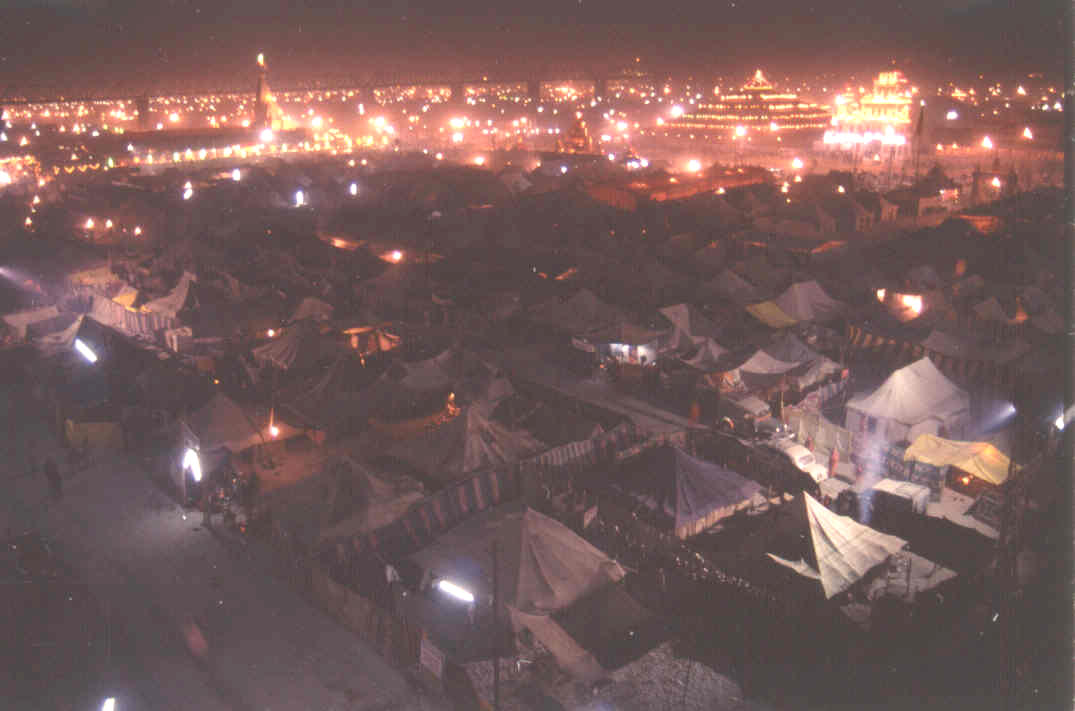