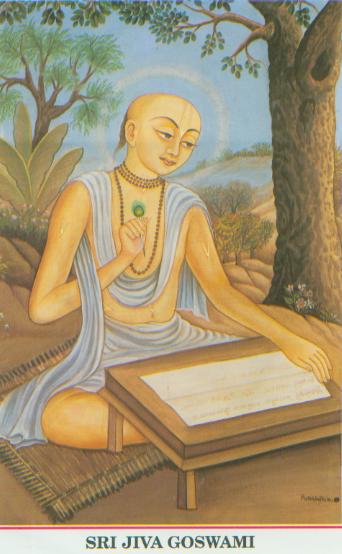 Appearing as the nephew of Sri Rupa and Sanatana Gosvamis, Sri Jiva Gosvami displayed all the charming features of a mahapurusa (divine person). He had lotus eyes, a high nose and forehead, broad chest, long arms, and a radiant golden body.

In his boyhood he made a Deity of Krishna-Balarama. Ex­pressing his pure devotion, he would often cry while worshiping Them. After offering clothes, candana, flowers, ornaments, and tasty sweets to Krishna-Balarama he would take some and give maha-prasadam to his playmates. From the beginning Jiva showed his kindness to other jivas (living entities). Jiva was so much at­tached to Krishna-Balarama that at bedtime he would embrace his Deities and fall asleep. His parents thought he was only playing. But the villagers rejoiced to see Jiva's love for Krishna-Balarama.

In school he quickly mastered Sanskrit grammar, poetry, logic, philosophy. Srimad Bhagavatam gave life to his life. Knshn'd-katha filled him with happiness. No one dared to speak to him about anything but Krishna. He toured Navadvipa-dhama with Sri Nityananda Prabhu, studied Sanskrit in Benares, and then resided in Vrndavana. After humbly serving Sri Rupa Gosvami by washing his feet, preparing his manuscripts, and editing his books he received diksa.

Once the aging Vaisnava, Vallabhacarya, gave critical advice to Sri Rupa Gosvami on his writing. Although much younger than the venerable Vallabha, Sri Jiva brazenly spoke in defense of his guru. Sri Rupa Gosvami scolded Sri Jiva telling him to leave Vrndavana. Living in an abandoned crocodile hole in Nanda Ghat (45 minutes from Sri Rupa's bhajana kutir), Sri Jiva Gosvami began fasting. He subsisted on wheat flour, which he begged, mixed with Yamuna water. Seeing his strict self-denial, Sanatana Gosvami brought him back to the service of Sri Rupa Gosvami.

Srila Prabhupada once commented on this "guru-disciple pas­time." "Sri Rupa Gosvami cast out Jiva Gosvami to teach us, the devotees of today, a lesson. It was not done to teach or punish Sri Jiva Gosvami, who is a perfectly liberated, eternal associate of Lord Krishna. Rupa Gosvami sent Jiva Gosvami out of Vrndavana to teach all jivas what he wrote in Upadesamrta: vaco vegam man-sah krodah vegam, jihva vegam... At all times, a devotee should control his tongue, his speech, and always remain humble, trnad api sunicena."

After the disappearance of Sri Rupa and Sri Sanatana Gos-vamis, Sri Jiva Gosvami became the Gaudiya Sampradayacarya to guide all Vaisnavas in Navadvipa, Vrndavana, Jagannatha Puri. Although he was the undisputed leader, he always acted as a humble servant of all the jivas. Whenever Bengali Vaisnavas visited Vrndavana he would lovingly receive them, arrange for prasadam and comfortable rooms, an even guide them on Vraja mandala parikrama.

A superexcellent Sanskrit scholar, Sri Jiva Gosvami would compose Sanskrit verses in his mind and write them down without changing anything. Write them down means he used a metal stylus to permanently etch them in palm leaves. This inscription method left no room for erasing, editing, rewriting, or running a spell-check. Yet, each verse was a priceless gem of perfect meter, rhythm, poetry, and meaning. He was the greatest philosopher in all of Indian history. Contemporary Sankritists call him the greatest scholar who ever lived.

Sri Jiva Gosvami was the youngest but most prolific writer among the Gosvamis. He wrote an astounding half million Sanskrit verses (about 25 books). His books prove that Sri Caitanya's philosophy gives the essence of Vedic wisdom and the perfection of religion. Gopala Campu, Sat Sandarbhas, and Had Nama-vyakarana are three of his most famous works. The San­darbhas firmly establish the transcendental truths of Srimad Bhagavatam. They also confirm that Lord Sri Krishna is the Supreme Absolute Truth (svayam bhagavan), the cause of every­thing and the source of all avataras. Anyone who faithfully reads these books will become a devotee of Krishna.

The following quote comes from Sri Jiva Gosvami's nectarean Gopala Campu, which describes the playful Vrndavana pastimes of Radha Damodara. "From Govardhana Hill a large form of Govardhana manifested. All the Vrajavasis along with Krishna Himself then offered obeisances to that towering form. As Sri Krishna stood by with folded hands, that great personality Govardhana bellowed, 'I shall eat all your offerings.' He ate and drank water by emptying all the kundas around the hill. While eating all the preparations made by the Vrajavasis with his right hand, he snapped the fingers on his left hand. The cowherd men ran out of the way when Govardhana stretched out His hands to take more and called out, Aniyor! Aniyor! Aniyor! 'bring more, bring more, bring more.' "

At the request of Acaryarani Jah-nava Devi Thakurani, Sri Jiva Gosvami had Srinivasa Acarya, Narottama Dasa Thakura, Syamananda Prabhu take the Gosvami's writings from Vrndavana to Bengal. They translated them into Bengali and distributed them throughout Bengal and Orissa. They also preached extensively and initiated hundreds of devotees. In 1542, Sri Jiva Gosvami established the worship Sri-Sri Radha-Damodara in Seva Kunja, Vrndavana. His samadhi stands in the temple compound. Sri Jiva Gosvami is Vilasa-manjari in Radha-Damodara's nitya Vrndavana lila.

[Home page] [Back to Biographies of Saints and Sages list]