The Planet’s Earliest Civilization and How it Influenced the World 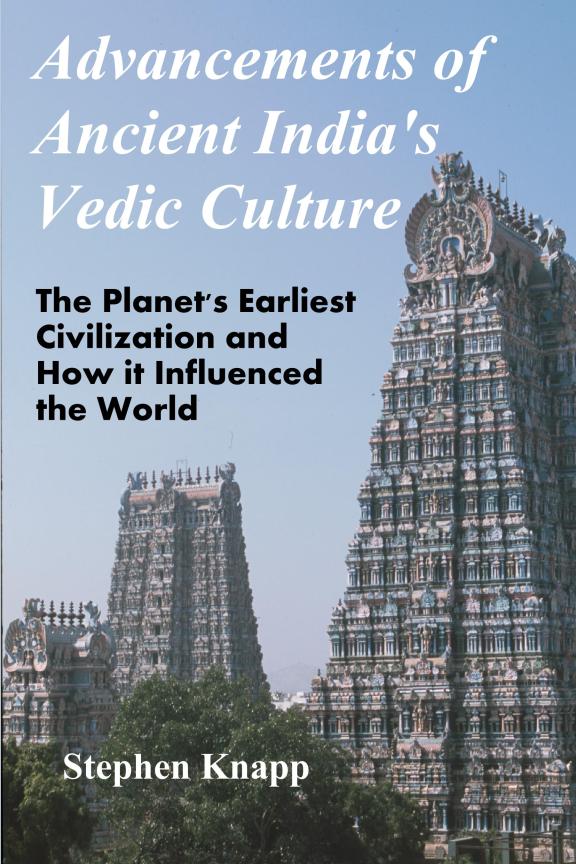 This book shows how the planet’s earliest civilization lead the world in both material and spiritual progress. From the Vedic culture of ancient India thousands of years ago, we find such things as the origins of mathematics, especially algebra and geometry, as well as early astronomy and planetary observations, many instances of which can be read in the historical Vedic texts. Medicine in Ayurveda was the first to prescribe herbs for the remedy of disease, surgical instruments for operations, and more.

Other developments that were far superior and ahead of the rest of the world included:

*  Writing and language, especially the development of sophisticated Sanskrit;

*  Metallurgy and making the best known steel at the time;

*  Textiles and the dying of fabric for which India was known all over the world;

*  The educational systems and the most famous of the early universities, like Nalanda and Takshashila;

*  The source of individual freedom and fair government, and the character and actions of rulers;

*  Military and the earliest of martial arts;

*  Along with some of the most intricate, deep and profound of all philosophies and spiritual paths, which became the basis of many religions that followed later around the world.

*  Plus, the Aryan Invasion Theory, putting the final nail in the coffin of the idea that the Vedic Aryans came from outside India, only to write the Vedic literature once they arrived, and to realize by proper evidence that the Vedic Aryans were and had always been the indigenous people of ancient India, Bharatvarsha.

These and more are the developments that came from India, much of which has been forgotten, but should again be recognized as the heritage of the ancient Indian Vedic tradition that continues to inspire humanity.

This book is especially good for the Indian youth who may be forgetting or never knew of all the advanced developments that came out of the ancient Vedic culture of India, which is why they should be proud of their heritage. In fact, every person of Indian descent, and anyone interested in the Vedic tradition, should understand this information to see the numerous contributions and origins of many of the sciences that we take for granted today. This book is also especially meant for those who lecture at colleges or universities but need the information for a more cultural presentation rather than spiritual, but which can still show the advanced nature of Vedic culture in so many aspects of life.

This book has loads of references and quotes to verify the information within. It also has 23 black & white photos to give a some illustrations to some of the topics.

CHAPTER ONE 1
INTRODUCTION TO VEDIC CULTURE’S ADVANCEMENTS
The Advanced Nature of Ancient Indian Sciences * The Antiquity of Vedic Culture * Conclusion: The Greatness of India and Vedic Culture

CHAPTER EIGHTEEN 188
INDIA AS THE SOURCE OF INDIVIDUAL FREEDOM
AND GOVERNANCE
Insights into the Purpose and Function of Leadership According to Mahabharata and Other Vedic Texts * Purpose of Government * How There Became a Need for a King * Anarchy Without a Proper Ruler * Who can Rule the Country * A Qualified King Must be Self Controlled * The Strengths and Characteristics Rulers Should Have * Further Descriptions of the Character and Duties of a King * A King Must Protect His Subjects * Taxes * Use of the Treasury * Defending the Country–Being Aware of the Enemy * Dealing With an Enemy * The Army * Duties of a King in Distress * A King Should Trust No One * A King Should Take Counsel * Character of the Legislators * The Need for Secrecy * Spies * A King Should Understand Characteristics of a Wise Man and Fool * Dealing With Criminals * Purpose of Punishment * Consequences for the Kings * Conclusion: Politics and Leadership in the Vedic Way

CHAPTER TWENTY-FOUR 286
HOW THE SCIENCES FADED FROM INDIA

CHAPTER TWENTY-FIVE 292
INDIA: HOME OF THE GREATEST PHILOSOPHIES AND SPIRITUAL CULTURE
The Real Treasure of India * Character of Hindus * Indians do not Appreciate Their Own Culture as Much as They Should

ADOBE READER E-BOOK EDITIONS for Stephen's books can also be ordered for reading on your computer no matter where you are, can be downloaded from www.lulu.com, or see all of Stephen's books offered in pdf format at: https://www.lulu.com/search?adult_audience_rating=00&page=1&pageSize=10&q=Stephen+Knapp